It was a happenstance of sorts.

The year was 2012. Wayne Peterson, Dr. Joe Webb and Chris Bondy were all in the same place at the same time – a meeting that would set into motion the blueprint for some printing companies to rise above the rest.

On that fateful day, Peterson and Webb attended the Cross Media Innovation Center Summit at the Rochester Institute of Technology, which Bondy, a professor at RIT, hosted. It wasn’t long before the three men started sharing their observations of the industry. “We were all finishing each other’s sentences,” Peterson says. “Frankly, the core business model for printing companies had run out of gas.”

The more the men talked, the more they agreed. They each saw what seemingly nobody else could – things were not working.

Peterson says printing used to be the business of “being asked to make a bunch of something.” It was hands-off. The job description was simple: print, bind and distribute. But the three realized that, as the industry evolved, printers needed to do more than their previous jobs.

They saw that printers were not providing a lot of value to their customers, and the diminishing amount of printing companies was proof. At the time, less than half of the business enterprises were thriving. “There was a pattern,” Webb says. “They had either production or sales problems.”

The second thing they realized was there were companies getting out of that “trap” – the trap being an outdated business model. The companies were identifying themselves as service providers to other industries such as financial institutions, and by being different, were coming out on top.

“As the business models ran out of gas,” Webb says, “people didn’t realize that was the problem.”

They agreed that the printing industry’s business model was no longer “slave-ish” (print, bind, distribute), but more of a fulfillment job focused on customer needs. They felt it was their duty to share their enlightenment with the industry.

Thus, their book, “UnSquaring the Wheel,” was born.

In the book, each author describes his own uncommon perspective on how the printing industry should change. Some of these revolutionary ideas include re-thinking printing equipment, technology integration and productivity. Other tidbits touch on specialization across verticals – it’s no longer just handing out paper. Smart printers are realizing that the profit is in the value you provide your customer.

Ask yourself, “What would the solution be worth to the customer?”

Take a look at Global Printing, which launched a full-service marketing arm known as Global Thinking in 2011. Jon Buddington, president and CEO, told the trio their book was equivalent to the blueprint he used to expand his company’s offerings.

And remember our previous story about Fuse, another company that decided to bring more value to their customers?

The printing industry is much more integrated into overall marketing objectives than it used to be. And if printers want to keep up, they must be able to ditch the old “rules” and make room for some new thinking.

“The future of printing is not a concern of mine,” Dr. Webb says. “I am more concerned about the ability of the industry to attract and cultivate entrepreneurial thinking and innovation. Without that, print is just print. With that, print comes alive with many new applications and markets.”

To call “UnSquaring the Wheel” a passion project would be an understatement. The amount of assessment, actionable suggestions and data-driven value has yielded much more than a casual piece of literature. These three squares gave readers the map to printing success just because they felt it was the right thing to do. And all they hope for the future is that companies read their book and take their advice. 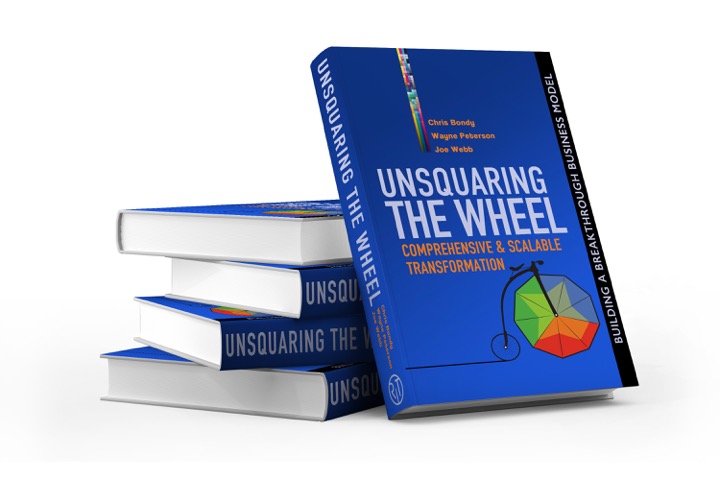